And the new Transformers movie title is.. Age of Extinction

There were a lot of rumours recently about the name of the next Transformers movie and Paramount Pictures has finally confirmed that Michael Bay’s 4th film in the series will be called Transformers: Age of Extinction. A kick-ass teaser poster announced the decided title and the movie is set to hit the big screen on June 27, 2014. The poster artwork shows the number 4 fused with half a Decepticon badge lying partly covered on the sand and gives away nothing of the proposed storyline. So now we know the name, but we have no clue what the storyline is all about. Michael Bay has been trying to keep most of it under wraps but has let slip some details that make it even more tantalizing. Bay has hinted that Dinobots will feature heavily, that there will be an epic chase scene and that the first movie in the second trilogy will be all about endings and new beginnings.

Sales at the box office from the first 3 Transformers were the entertainment equivalent of hitting the jackpot at a site like AndroidCasino.com.au. Transformers exploded onto the big screen and kept on offering a high entertainment factor for the following 2 movies, not once faltering or resting on their laurels as a Paramount franchise. Not one of the movies has sucked and even if you not a fan you have to admit they’ve been really awesome. Here’s hoping the next installment won’t be a letdown. 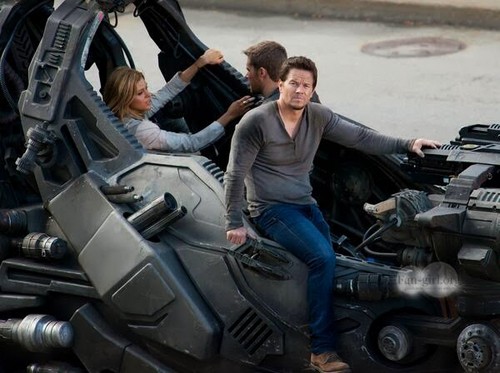 In addition to Michael Bay spilling a few secrets about the new movie, producer Lorenzo di Bonaventura also let slip that the Dinobots will give the audience a lot to be excited about. These new additions to the robot roster are a rather different ballgame, instead of changing from cars to robots they change from robots to metallic dinosaurs, giving us a bit more insight into the Age of Extinction title. He also confirmed that the movie will feature another collection of GM sourced cars including the Corvette Stingray, a Camaro Bumblebee and a f supercars like the Bugatti Veyron and Pagani Huayra.

Shia LeBeouf has handed the lead role over to Mark Wahlberg, so it’s definitely the start of a new era and we’re holding out to see whether it works out just as well as before.